11 April 2008, By: Pokerjunkie.com
Seven card stud is a classic form of poker played in live and online poker rooms around the globe. It's not as popular as it once was - Texas Hold'em has run away with the crown as most popular poker game in the past decade - but make no mistake: 7 Card Stud is a highly enjoyable, challenging and will continue to be around for a long time.

7 Card Stud was the de facto poker game of choice in poker card rooms in California and Las Vegas in the 1970s and 80s and it's got all the old school pedigree you can hope for. Some of the best poker players in world, in fact - Phil Hellmuth, Daniel Negreanu, Phil Ivey, just to name a few - cut their teeth on Stud games and once you play a few rounds you're likely to be hooked, too.

The rules of 7 Card Stud, while a little trickier to pick up than Texas Hold'em, are also fairly easy to understand so you can jump into a free 7 Card Stud game online within minutes if you so choose. Optimal 7 Card Strategy can take a bit longer to master but it's well worth putting the effort in as most players aren't particularly talented at the game.

If you plan on playing mixed games, knowing the 7 Card Stud rules backwards and forwards is important, too. Learn the basic rules for How to Play 7 Card Stud below and be sure to check our Poker Strategy pages for more advice on 7 Card Stud play.

How to Play 7 Card Stud 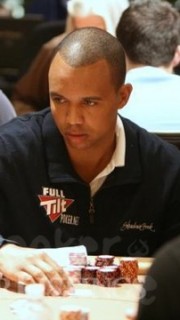 So that's important to note. And while all seven cards dealt to each player are individual - no community cards exist - you will still try to make the best possible 5-card poker hand. 7 Card Stud is rarely played in No-Limit form so most games are played as Fixed Limit.

As dealing a full seven cards to every player requires a lot more of standard 52-card deck than Hold'em, 7-Card Stud is usually played by between 2-8 players players at a table.

It's not likely all 8 players will make it to the end of the hand so there will typically be enough cards left for the dealer to deal a full round. Should too many players remain in the hand at the river to deal individual cards to each player a single community river card will be placed on the table.

7-Card Stud Rules can be broken up into a few simple categories:

7 Card Stud is often played as an ante game with a Limit betting format. The ante (usually 10% of the big bet) will be paid by each player before the hand begins. The bet sizes will be decided beforehand as well - eg. $1/$2. You will know the stakes at the table before you sit down.

That means there are two bet sizes - a small bet and a big bet - that will be in play and will restrict the amount you can bet in each roundBets and raises are made in increments of the Small Bet (in the first two betting rounds) and the Big Bet (the last three betting rounds).

There is also usually a cap on raises in each betting round (a bet and 3 raises). 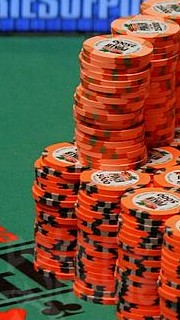 Any showing card is referred to as an "upcard" or "show card" as well. The first up card will also determine which player is responsible for making the first bet - also known as "the bring in" or the bring.

7 Card Stud Rules - The Bring In

Once each player has their three cards (two face down, one face up), the player with the lowest ranking up-card is required to make the bring-in bet.

This bring-in bet is pre-determined and set by the table. The bring in player can also complete the small bet amount as set by the table limits. Eg it can be $1 in a $1/$2 Stud game.

If two players have a card of the same value the suit determines who makes the bring-in. Suits are ranked in alphabetical order from lowest to highest, so clubs is lowest followed by diamonds, hearts and then spades (highest).

Once the bring in has been paid the betting then continues in a clockwise order. Players can match the size of the small bet or raise in one added increment of the small bet. When all the remaining players have contributed equally to the pot, a card is burnt by the dealer and a fourth card is dealt face up to each player.

Once each player now has 4 cards (2 face down, 2 face up) a second betting round follows. The player whose upcards now make the best poker hand acts first. (Straights and flushes do not count because less than five cards are face up.)

Betting then proceeds to the left of that player and is again only allowed in increments of the small bet size for the table. Once all bets have been matched again, another card is burned by the dealer and a fifth card is dealt face up to each player. 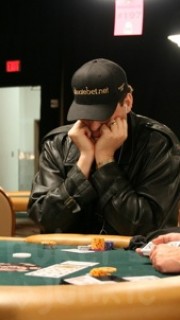 The player with the best hand again initiates the next round of betting (which proceeds the same way) but the bet limit is now upped to the amount of the Big Bet for the table and will remain that way until the end of the hand.

Once all players have matched any bets or raises in the final round a showdown occurs. The player that made the last bet or raise reveals his/her cards first. The remaining players then reveal their hands clockwise.

Players that don't want to (or can't) compete for the pot can choose to muck their hands unseen. The player with the best possible 5-card poker hand wins the pot.

If two or more players have the same five-card hand, the pot is split between them. If you need a refresher on the standard poker hand rankings, see below. Hand rankings for standard 7 Card Stud are the same as they are for both Texas Hold'em and Omaha.

Note: If you are playing Seven-Card Stud Hi-Lo and low hands are counted for half the pot, the above rankings do not apply in reverse for low hands. See below for more. 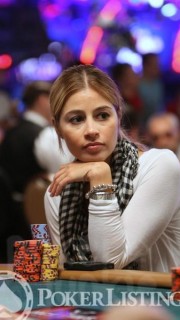 A 7 Card Stud Hi-Lo game plays exactly the same as a standard 7 Card Stud game with one major difference:

Razz Poker, another increasingly popular game both live and online and a part of many Mixed Games, is essentially an entire game of Seven Card Stud Low where only the lowest hand wins the pot.

All you need to do is simply create an account at one of those poker sites and navigate to the 7 Card Stud games. There you will find a few 7 Card Stud games running at very low limits. To make a deposit there are numerous. accessible options available to you (Visa, Mastercard, pre-paid cards, Neteller, Skrill and more) and minimum deposits are as low as $10.