3 September 2008, By: Pokerjunkie.com
Badugi is a poker game unlike any you have ever played before. While that might seem a bit foreboding, we can assure you we mean that in the best way. Badugi is a super fun, action-packed poker variation that once you play you'll be hooked on.

Badugi is a four-card, triple draw lowball game where not only do the suits matter (!) but the number of valid cards in your hand matters, too.

Still with us? We hope so, because playing Badugi is worth a go. And the rules of Badugi are not particularly difficult to pick up. As you can imagine, though -  your hard-earned knowledge of other poker games won't help you too much.

How to Play Badugi

Badugi is a "blinds" game, which means it follows the same blind structure as other poker games like Texas Holdem and 7 Card Stud with mandatory small blind and a big blind bets put into the pot before the hand starts.

If you need a refresher on how blinds work, check out the pages above for the full details. Playing with blinds is where the comparisons end with those games, though, as Badugi play proceeds quite differently.

While it's closer to lowball and draw games like 2-7 Triple Draw and Razz, it's still much its own game. Major differences with Badugi Rules: What is a Badugi?

Before we even begin to explain how to play we might as well start with the obvious: What is a Badugi? In short, it's:

That's what you're playing to get in every hand, and the lowest version of it possible. As Aces are always low in Badugi the lowest possible Badugi you can get is:

Each suit MUST be different for a hand to be considered a Badugi. If no player has a four-card Badugi at showdown (more on this below) the best hand becomes the best 3-card Badugi (and so on).

A Badugi game is played with 2-8 players. If you play Badugi in a live casino or online the dealer will be provided and be in a static position at the table. A dealer button will move around the table clockwise to represent the dealer position.

As in Texas Hold'em, Badugi is played with forced bets call blinds put in the pot before each hand begins. These positions are to the direct left of the dealer.

There is a small blind and a big blind. The small blind is typically half the size of the big blind. Common stakes you can find online are 5c/10c or 50c/$1.

Once a hand finishes, the dealer button and the blinds all pass one seat to the left. This ensures each player will be in the dealer position and pay one small blind and one big blind per orbit around the table.

This is important for Badugi as position in a hand determines how much information you have before you need to make your play. Once the blinds have been put in the pot the dealer deals each player four cards face down starting with the player to his or her immediate left.

There are no shared or community cards dealt. Each player's four-card hand is entirely his or her own.

Once all players have folded or matched any bets put into the pot, players have their first drawing round. Any players still in the hand may discard any number of cards in their hand and receive replacements. The dealer deals all of the requested cards to each player in one go.

Once all players have discarded and received the desired cards there is another round of betting. This round of betting starts with the player closest to the left of the dealer.

Players can again choose to check or bet, and fold, call or re-raise any bets. Once all bets have been matched any remaining players may discard and draw replacement cards again.

Once all replacement cards have been dealt a final betting round begins. Once again, after all bets have been match (or all players choose not to bet, of course), any players left in the hand will go to a showdown to determine who wins the pot.

As mentioned above a four-card Badugi is the most desired hand. All four cards must be of a different suit and different rank with the lowest Badugi being declared the winner.

Aces are always low which means A-2-3-4 is the lowest Badugi. A-2-3-5 is the second lowest. K-Q-J-T is the worst-ranked four-card Badugi. If, however, no players have a 4-card Badugi, the lowest 3-card Badugi wins the hand.

If any of your cards duplicate in either rank or suit the duplicate card does not count. So if you have two hearts, one heart is excluded from your final hand. Likewise if you have a pair or three-of-a-kind. This means a player may be left with a one-, two- or three-card hand for the final showdown. But:

If the highest cards in the Badugi are tied then the next-highest card determines the winner. Two players with the exact same hand split the pot.

The worst possible final hand is K-K-K-K, which counts as a one-card king. Here are the top 10 hands according to Badugi showdown rules:

If more than two players go to a showdown you will probably need a Badugi to win. If someone stands pat before the last draw he or she almost certainly has a four-card hand and your three-card hand, no matter how strong it is, will probably not win. 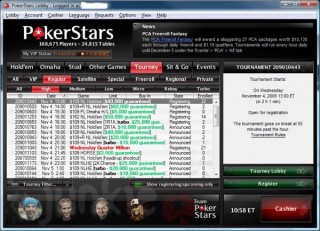 The only poker site we've played that spreads Badugi online is PokerStars, although that could change at any point as more and more poker players become interested in Mixed Games.

Badugi is rarely offered as a free or play-money game online so if you'd like to give it a try you'll need to create and account at PokerStars and make a small deposit.

One of the variations of Badugi poker you might find in mixed games or online is a variation called Badeucy or 'Badeucey.' Badeucey is a split-pot game which is a mix of 2-7 Tripe Draw Lowball and Badugi.

In other words the pot is split between the player with the best 2-7 lowball hand (see our 2-7 Triple Draw Rules) and the best Badugi hand. The game basically plays the same as Badugi except:

High-stakes pros like to mix Baducey into their Mixed Game rotations. You can also occasionally find a Badeucy game running online at PokerStars.